Roll a handful of dice, assemble following simple rules, and create a dungeon to explore in minutes!

A collaboration with Brian Stauffer, @brstf, who is also responsible for the excellent artwork.

While supplies last the new colorful version is being included with purchases at: https://store.cairnrpg.com/

Originally written for the Pleasure Not Business Card Jam.

Can I make my own Wallet Dungeons?

The text of Wallet Dungeons is licensed under the Creative Commons Attribution 4.0 International License. You can use any and all of it as long as you credit me!

The mechanics of Wallet Dungeons are uncopyrightable, so feel free to steal and adapt them as much as you like. I'd still appreciate a shout out, but it's not necessary!

Hi, great genarator. I'll use soon. But I found a typo in Brazillian version: first page. The passage dice should be 2 dice instead of 1 dice. Cheers.

Whoops, thanks for the heads up. I’ll get that fixed.

This is a gem!

I'm having trouble understanding how to use labyrinths. I've build a dungeon, made sure I place everything according to the rules - and I ended up with multiple single-room labyrinths. How does one use such rooms?

Two answers to the labyrinth question:

First, you shouldn't be able to get the labyrinth result except on multi dice rooms (Towers and Halls). It is intended that if you have a room that's next to a Hall or Tower, you don't include the entire room in the sum, just the physical die that the room is touching. Small example but if you have [6][6][3] you'd have a Hall with a total of 15 (Arboretum) and a Split with a total of 9 (Kitchen).  I wanted Labyrinth to only be likely to show up if you had a particularly large Hall or Tower, where it would makes sense that the interior could be broken up into a complicated maze. I just didn't have enough space to explain things fully enough to avoid confusion.

Second, the nice part of this system is that even if you don't resolve things the way I intended, you still end up with something you can use. In your case, if I ended up with several single room labyrinths, I'd be tempted to say that they're all connected with portals or some weird non-euclidean geometry. Or a less esoteric answer could be that those are all entrances to a labyrinth that stretches across the floor below the rest of the dungeon.

The third bonus answer is that the exact results the dice spit out is often not super coherent or useful as is, and requires a bit of finessing on the part of the user to make it work at the table.

Really simple procedural maker, doesn't always come up with most logical arrays of rooms and story prompts but great as a springboard for imagination.

So, if I get 5's they are supposed to be stacked on top of each other. But what if I rolled only one 5?

Only one 5 means it's a very short tower!

The non-glib answer is that the generator fails a bit for some combinations of numbers. Rolling multiple fives means you have a tower, rolling just one makes it just another room and some of the specific rules don't make a ton of sense anymore.

I'm inspired to work on something similar - Wallet Wilderness or Wallet Social. I use this tool a lot for solo play, and I think both of these could be good expansions of your original incredible idea!

If you make either of those please let me know! I'd love to see what other people can do with this idea!

Really inventive use of dice. I'm printing and laminating a copy for my GM toolbox.

This is really nice. Appreciate both the layout and the concept. Gonna recommend it to all my friends or anyone who will listen. Will be very helpful in solo rpgs.

I had a question about Towers. If I roll say three 5s, do i stack all of these into a single tower?

If so, my assumption is that I use the neighbours in a top-down view to determine Room and Detail for the entire tower? Is this right?

Yeah, you'd stack all the 5's into a single tower three dice high.

The way I determine the room is to add up the entire tower (in the example on the card it's 10+neighbors = 19). Then for things that neighbor the tower, I only count the specific dice that are physically in contact (so for the 3 die it only gets +5 from the tower).

Hi ! Thanks for your generator it's really nice. I have a question for the "extra detail" of each room. Could you explain how to determine which value to take (highest/lowest) is it me that choose if for example i have 2 die 3 and 2 die 5 ?

I agree it's unclear, unfortunately space constraints meant I couldn't figure out a good way to explain it better. Here's how it's supposed to work:

Pick the room you want to add details to.

So as an example, if you use the die layout that's on the card, the Throne Room (two 6s) has a 3 as it's lowest neighbor, so it's "Pristine".

Alright thank you for your answer i get it now. I also thought that it was a space constraint that forced you to not explain more.

I like your project, if you want a French translation don't hesitate to ask and give me an email address to send you the translation.

That would be really cool! If you want to email me at DavidJLombardo@gmail.com we can talk more about it.

Would you also be interested in a Spanish translation? I'm up for it!

Absolutely, please feel free email me about it.

Aso if you like an Italian version just ask

Absolutely! Please shoot me an email so we can talk about it. 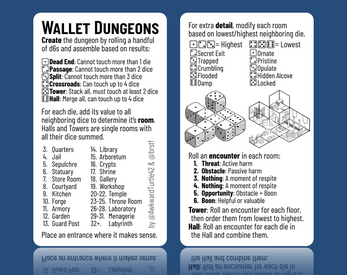 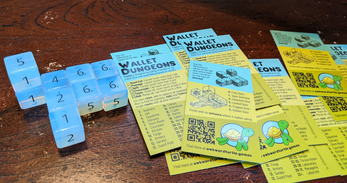 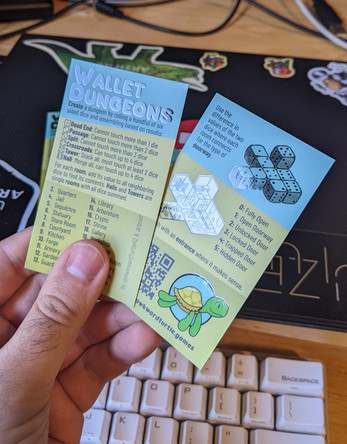